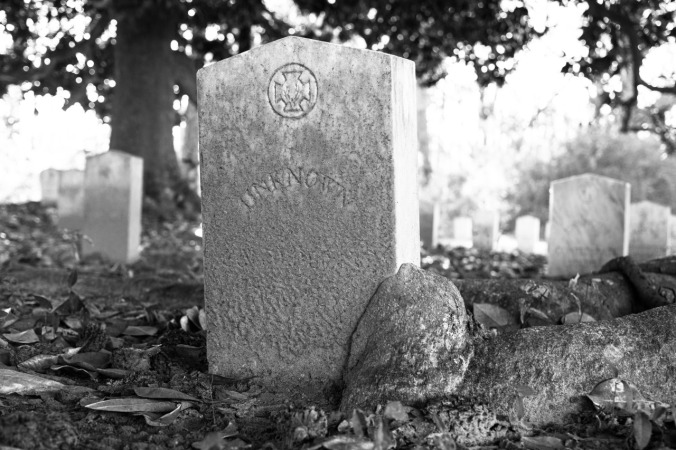 The grave of an unknown soldier in Friendship Cemetery, Columbus, MS, restin place of both Union and Confederate soldiers from the Battle of Shiloh.

As I’ve mentioned before, I’ve never been a stranger to death. Or rather, Death™ has never been a stranger to me. My father passed away when I was 6 months old, his father following 6 months later. After that, it was a seemingly endless parade of funerals and funeral processions through the country roads of the North Mississippi and broader Mid-South until I tuned 19. At that point, I was seemingly granted a reprieve until 23 when my first close high school classmate left us unexpectedly. At this point, I feel like my dealings with Death and death have been at fairly ordinary intervals, but when you stare her in the face more often than not as a child, it leaves an irrevocable mark. This mark has led to my relationships with ancestor veneration, methods of divination, certain deities, and my practice in general.

Recently, my uncle passed away. It was somewhat unexpected and definitely hit me hard. The more I thought about it, the worse I felt cause it had been a while since I’d seen him. Then I realized that my younger cousin has never really faced the death of a close loved one, let alone a parent. Her older brother was ~12 when our grandmother passed away, but she was only 5. I know she’s been to other funerals, but that’s not the same. They’ve been amazingly strong, but I know hoe deep-seated that pain can be and how quickly it can come rushing to the surface with the force a tsunami without a moment’s notice.

This funeral was different for me in many ways, too. This is one of, though not THE first time I’ve attended a family funeral as my adult self. For my very rural family, sometimes this presents the issue of “explaining” me to their friends and neighbors as I walk in with blue hair, stretched ears, and a face full of metal. Now Daddy’s side could care less what anyone else thinks for the most part, but Momma’s is the opposite. Thankfully, as weird and wrong as that sounds, this was Daddy’s side, but it doesn’t change the way death always seems to mark me as an outsider since I’ve become an adult. Of course a funeral that isn’t mine isn’t about me, so it just leads to long-term suppression of those emotions that tend to erupt down the road in unpredictable ways.

The drive to rural North Mississippi alone gave me a lot of time to reflect on my own thoughts about death and afterlife. This was compounded by the times I had to zone out because the message that may or may not have been comforting to every other person in the room was doin nothin but grating my nerves. I found myself pondering the Greco-Roman nature of the rural funeral parlor, the motifs a mix of Christian and pagan elements, wondering if I was the only one to notice. It certainly allowed a much needed escape while pinned between in-law-esque family members that would likely string me up were they to ever learn of my religious practice or beliefs. I guess it’s worth noting here that I’m not actually related to these particular folks, but I know em well enough to know their thoughts on the matter. But these Greco-Roman pediments led down an ADHD trail of my own musings about what comes next. In that same vein, I always worry what family who pass will think of me as they view me from their Otherworld, but I swear if I didn’t feel a bit of comfort from my uncle, a Southern Baptist preacher, as if I felt him laid a hand on my shoulder and tell me he understands when envisioning adding him to my ancestor shrine space.

I firmly believe in an afterlife, but what that looks like, I frankly have no idea. For me, it feels natural at this point to think that I’ll spend some time with Donn after passin on before movin on to Tír na nÓg (or some other realm of existence) at some point. But do I think that same reality applies to everyone? I don’t know. Comin from an evangelical Christian background, a background that told me that everyone goes one of 2 places despite whatever religious convictions they held in life, I find it ridiculous to reassert that same belief system that forces everyone in to a cookie-cutter conception of an afterlife. So where does that leave me? Honestly, at an impassible juncture as of now. Ultimately, I’m not sure it matters; what happens after death is what happens, regardless of what I might like it to be. Maybe we each go where we believed we’d go in life. Maybe we can visit other peoples’ afterlives. Maybe we all go to the same place. Maybe there’s not anything after this. At some point, it becomes counterproductive for me to continue to dwell on the future in that capacity when there’s so much to be done in the here and now. And that’s where it’s left me.

But drivin those small town roads, a caravan of vehicles farther in each direction than the eye could see as we crested those Mississippi Pine Country hills, made me realize how much “home” is here for me. The casseroles, the funeral chicken, the good memories, all call to me in a time of death and remind me that Death will always be a constant companion, even if we lose touch for a little while. Despite what anyone else has to say about it, my home is here in the rituals, the landscapes, and the people of the South. Regardless of where I draw my breath, it always will be. I’d be just fine with an afterlife on the old family property, watchin the next generations learn and grow, protectin them, guidin them, and remindin them of those feelins of home. This is where I want to be, where I belong, and where I’ll hopefully one day rest my bones. Anything else is just gravy.